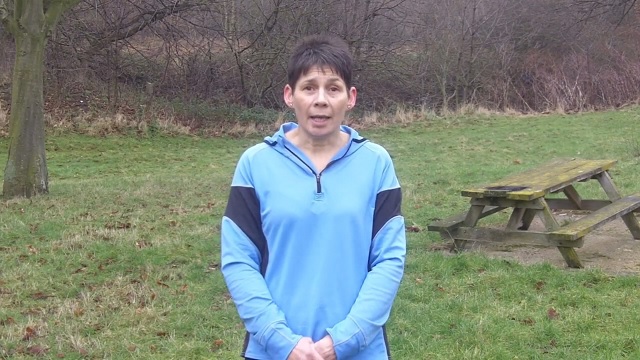 “My name is Carol. I am 48 years old and have been coached by James for nearly 18 months.

I have always kept myself fit and have completed a half marathon previously, but after a break from running due to an injury I was finding it difficult to progress with my running and fitness.

I even began to dislike running immensely which was frustrating as I had recently started competing in triathlons. I found myself avoiding running and concentrating on cycling and swimming instead. I also found that I was going for runs and my times were not improving, and I was even stopping on occasions when running only 2 miles.

I looked at many personal trainers but chose James as he seemed to focus on running and weight loss and I was also keen to lose some weight. I also liked the idea that we would be outside running rather than being gym based.

James has a running background as well as being an accredited coach, so I felt he would be able to focus on my individual needs. During the sessions he also runs and trains with you which makes it enjoyable and is great for motivation.

After our first session James was able to determine quickly what my issues were with running and we planned some sessions and agreed some targets which to my fear was a 10k race with no stopping! I also wanted to shed some weight and was hoping to complete an Olympic triathlon which has a 10k run at the end!

James taught me to understand running much better. He ensured that I ran at even pace throughout my runs instead of setting off too fast which resulted in fatigue and then me stopping.

I also learnt to train more effectively instead of just plodding the streets for hours. He changed this to a long run and 2 different short sessions focusing on speed which broke the monotony and made my running enjoyable again.

After just 2 months I completed the 10k in 54 minutes which was my best time for a few years, and I didn’t stop!

We continued to train throughout winter with James continually evaluating my progress and giving me feedback. The focus was now on improving my fitness and speed for the triathlon season now that I had regained confidence in my running ability.

In May it was time for the triathlon season and I was keen to see what I could achieve. I had already reached my desired weight and I knew I was fitter and faster from the feedback James always provides after each session. My main hope now was to produce a faster run than when I had done this course previously.

I was thrilled as I ran 2 minutes faster but also cycled 4 minutes faster as well as improving my swim time. James was not surprised as he had already calculated that I had improved by 5 to 10% on all of my running sessions with him. My resting heart rate was also down from 64 to 48 which just shows how much fitter I had become.

My next big target was to complete the Olympic triathlon. James was great at motivating me and challenging me with our sessions to ensure I continued to improve my fitness and running ability. In August I completed my Olympic triathlon within my target time which I was delighted about.

Unfortunately I suffered a nasty virus before winter and felt I was back to the beginning again. I was struggling to run 2 miles without being exhausted. Again James guided me through this difficult period, and with his support and encouragement I am now back to my best fitness and working towards my next goal which is a half iron man triathlon.

Already James has taken this challenge on board and I can see he has thought through my sessions carefully and also planned a training schedule for me. This will ensure that my strength and fitness is the best it can be for the race.

James also recognizes that I have the other disciplines of cycling and swimming that I need to train for. He has produced a clear program for me to follow which incorporates these activities as well as some new challenges such as a weight training session to ensure that I have the best chance of completing my goal.

Although this may seem like a lot of hard work, the benefits that I’ve got from James’ coaching and the huge improvements I’ve seen make it easily worth it.

I would also like to say that James and I have become good friends now and although we train hard we also have a good laugh while we are training. We have run in mud, deep snow, been chased by dogs and geese and are well known around the park where we train.

I would definitely recommend James if you are wishing to improve your running or general fitness or want to lose weight. He is extremely motivated and will work with you to ensure that you reach your goals.”